Mince pies, wintery stews, and of course, the Christmas turkey – our ovens are expected to work overtime at this time of the year, but they aren’t always up to the task.

How many times have you come home to a smoky kitchen, or run out of hobs whilst cooking a three course meal?

If you’re day dreaming about updating to a new oven then read on because we’re about to reveal five of the most amazing, modern and turkey-friendly ovens in the world.

At GE’s recent HOME 2025 exhibition, all eyes were on the company’s futuristic ovens. Set to be the next big thing in appliance technology, the company debuted their app-enabled oven, which allows you to control your cooking remotely using your Smartphone.

The app can connect with GE’s existing models (including the PT9050, PT9550, PK7000 and PK7500), and allows you to pre-heat your oven, control the temperature, set a timer and stop cooking – whether you are in the house or not.

Thought to be one of the most expensive ovens in the world, La Cornue Grand Palais Stove Range starts at £30,000. For this price, you get a state of the art, hand-made, six-foot long oven, which includes six burners, a lava rock grill, a convention gas oven, an electric oven (both vaulted, of course) and a hotplate. This really is the ultimate appliance for a designer kitchen.

The Kamado is one of the most ancient ovens on earth. Traditionally egg-shaped and made from clay, the Kamado was used for thousands of years in Japan, China and India.

Today’s versions are bigger and better than ever before. The most coveted Kamados are made from cast iron with a heat retaining ceramic shell, which allows the ovens to reach temperatures of up to 750F, just under 400 Celsius.

They are also specially designed to be able to hold several shelves, allowing you to cook a number of dishes at the same time too.

The AGA is a British institution. The iconic cast iron ovens are known for being enormous, all-purpose designs, which heat the house, dry your laundry and cook your food all at the same time.
Most foodies dream of owning an AGA, but the main issue is the space – the average AGA is approximately 1000mm wide. So the company has started making a standard-sized 600mm ‘City’ oven which can slot into any kitchen and looks fantastic in your home. 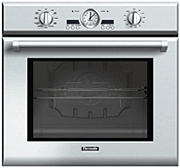 Sick of waking up at 5am on Christmas morning to start cooking the turkey? This may well be the oven for you.

The Double Speedcook oven claims it can roast a chicken in just 20 minutes – perfect for impatient chefs, but less useful for fans of slow cooking. This oven would however certainly save you time when family, friends and guests are popping over for a meal.

So there you have it. If you need your oven cleaned in the coming weeks, be sure to contact Ovenu today.