Shopping for a new oven can be an unnecessarily long-winded process. With so many different types of appliance available, understanding which type to buy can be a tricky process. The oven is the main focal point for most kitchens, and therefore its aesthetics are almost as important as its performance.

There’s no point in buying an oven that’s unnecessarily large if you live in a small apartment, but if you cook regularly then you’re going to need something that can match expected culinary standards. Use our helpful guide below to find an oven that’s perfect for you and your home.

Stand-alone, otherwise known as free standing ovens, don’t require the support of a cabinet, unlike their built-under alternatives. They are independent units, usually fitted into a select gap in the kitchen counter.

Although easy to install, these appliances usually limit creativity when it comes to placement, as their spaces are already designated. As they require their own space, they tend to look slightly less integrated into the kitchen’s overall aesthetic. That being said, the fact that they can be easily installed and removed makes them the ideal choice for those who are renting or moving into a new home without a fully fitted kitchen. It also means they can be easily repaired and updated when it comes round to redesigning your space.

The ideal solution for those to who need  more space, built-in ovens can be both wall and bench mounted. Whilst the former is self-explanatory, the latter refers to the oven being mounted or fitted under a kitchen counter.

Both types of oven blend seamlessly with the kitchens design and therefore have a much larger appeal in terms of looks. The wall-mounted style is particularly convenient as it removes the need to bend down every time you wish to check on dinner or take out a tray.

Choosing between a single or a double oven will all depend on the amount of food you cook and the capacity you think you’ll need. Do you regularly cook big meals for a large number of people? A large double oven is probably best for you. Live alone and only cook once in a while? Opt for a smaller single oven instead.

Whilst a single oven will usually suffice for simple meals, using a double oven gives you many more options in terms of cooking style as well as space. With a double oven, you can use both ovens separately at varying temperatures to cook complex meals that require different cooking times, thus giving you much more control over your kitchen.

It’s also worth considering the number of shelves you’ll need. When it comes to shelving in ovens, having a large amount is best, as long as you’re able to remove them when not needed. The more shelves available, the more options  you have when it comes to cooking. However, having irremovable features will restrict the cooking space; thus leaving you unable to get the most out of your appliance.

When it comes to choosing between gas and electric, there are several factors to consider including running costs, cooking power, temperature control and ease of installation. 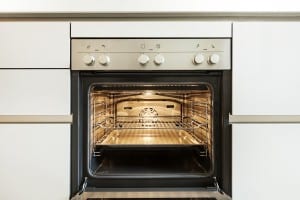 So far gas has always been cheaper to cook with. As gas and electric bills rise across the country we may see this trend begin to change. At the moment if you’re looking for a cheap to run cooker, then choose gas.

Unlike most gas built-in ovens, nearly all electric ovens come with fans built in so they can spread heat evenly around the oven. Fans cut cooking times and reduce the temperature needed to cook. Because built-in gas ovens don’t usually have this feature their cooking ability suffers when compared to electric fan ovens.

The combination of oven fans and the electric thermostat located within most electric ovens means that it’s usually much easier to control the cooking temperature with an electric oven.

Most gas powered ovens are not equipped with fans and so it can often be difficult to achieve and maintain an even cooking temperature.

Freestanding electric ovens can be easily installed by simply plugging them into the socket. Installing a built-in electric cooker is slightly more challenging, and unless you’re sure of the process, it’s recommended that you hire a professional.

Gas cooking appliances will need to be professionally installed by a Gas Safe registered engineer, and therefore take a lot more time and expertise to install.

Equipped with this handy guide, your oven choosing process should go a lot smoother. Let us know if this helped you, and what type of oven you chose over on our Facebook page.

Inside an Oven From BigStock