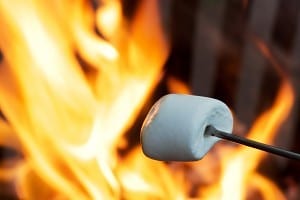 “Remember, remember the fifth of November…”

Yes it’s nearly time to prop up Guy atop the bonfire, light some sparklers and watch the sky explode with colourful fireworks.*

But before you go lighting your bonfire and filling the air with that beloved smell, why not fill your bellies with these tasty snacks. Quick to cook, they can be prepared effortlessly for family and guests, making them the ideal food for fireworks night parties.

The savoury treats make an appealing alternative to the sugary sweets so readily available around this time of year. 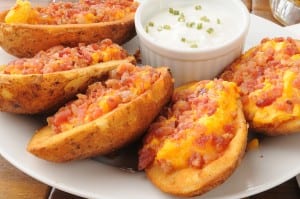 Wash the potatoes and bake them all in the microwave on maximum heat for 40 minutes (use a skewer or a sharp knife to check that they’re cooked through).

Once baked, remove the potatoes and allow them to cool.

Meanwhile, pre-heat the oven to 180oC (160oC for fan ovens) or gas mark 4. Add generous amounts of the sunflower oil to a roasting tin and place it in the oven.

Fry the bacon, remove the fat and dice into small pieces.

Cut the potatoes in half and scoop out the inside, leaving a thin layer of potato attached to the skin. Place the potato in a large bowl, and put the skins in the oven and roast until golden.

Mix the butter, cream cheese and bacon together in the bowl with the potato. Add a dash of milk and season with salt and pepper into the bowl. Continue mixing until smooth.

Remove the skins and place on kitchen paper to drain. Remove the baking tray from the oven, and once it’s cooled, pour the oil away.

Fill the potato skins with the mashed potato mixture and top with the grated cheese.

Place the stuffed skins on the baking tray and bake again in the oven at the same temperature for roughly 10 minutes, until the cheese is nicely melted.

Take them out from the oven and give them a few minutes to cool before tucking in.

Easy to make and absolutely delicious to taste, these spiced apple pies go perfectly with clotted cream or vanilla ice cream if you have any to hand.

Roll out the pastry and cut it into 5½ inch squares.

Mix the apple filling with the cinnamon, lemon juice and toffee in a large bowl. Divide the mix evenly between each of the pastry squares.

Fold the pastry from the top right corner to the bottom right, encasing the filling. Seal the edges by dipping your fingers in milk and pinching the pastry together.

Place the pastries on a greased baking sheet and cook in the oven for 20 minutes, or until golden brown.

Remove from the oven and let them cool for a couple of minutes before feasting.

These decadent snacks can be easily prepared by both adults and children.

Place the biscuits on a baking sheet in a tray side to side, chocolate face up.

Put three marshmallows on each biscuit, and distribute the chocolate as desired.

Place the tray in the oven for approximately 10 minutes or until the marshmallows have turned golden brown.

Marshmallows can also be toasted over the bonfire, but make sure you supervise young ones if you choose to use this option.

Remove the tray and place the remaining biscuits on top of the grilled s’mores, then leave to cool for a few minutes before enjoying that gooey marshmallow goodness.

Bonfire Night is not complete without this great British staple. The juxtaposition of the juicy apple with the sticky toffee makes for the perfect crunchy autumn snack. 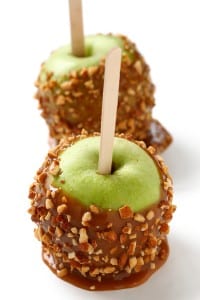 Begin by boiling the apples in a large bowl to remove their waxy coating.

Dry the apples thoroughly and remove their stalks. Push a large wooden skewer or an ice lolly stick into each apple’s stalk end.

Place the apples on a sheet of baking paper.

Tip the caster sugar into a pan along with the water and cook for 5 minutes over a medium heat until the sugar dissolves, then mix in the syrup and vinegar. Then bring the pan to boil for roughly 10 minutes. To test if it’s ready, the toffee should harden instantly if poured onto cold water.

Once ready, turn off the heat but leave the pan on the hob.

Working carefully yet quickly so the toffee doesn’t cool, dip each apple into the pan of hot toffee until fully covered, letting any excess drip away. Whilst it’s still sticky, sprinkle your desired topping over the apple. Hundreds and thousands or chocolate chips work really well, or if you prefer something slightly more savoury then why not opt for a sprinkling of nuts?

Leave the toffee to cool before taking a bite, and then enjoy.

How are you celebrating Bonfire Night? Head over to our Facebook page and let us know.