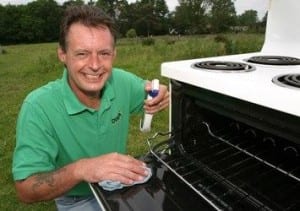 The company, which has around 100 franchises and over 60,000 clients per year, has created the franchise option in response to demand from potential customers who live in more rural areas.

The launch takes place at a time when people are turning to oven cleaning franchise opportunities to look for a new career prospect or as a new challenge following redundancy.

After an initial investment of £9,750 dedicated franchisees can, during a five-year contract, build a business with a significant income. The cost which is lower than cities is recognition of unique extra costs faced by businesses in rural locations and the smaller populations in the catchment areas.

This investment gives full training prior to the business launch and ongoing back-up and support throughout the life of the franchise. Franchisees also have access and rights to Ovenu’s respected trade name, trade marks and intellectual property including marketing strategies.

One of Ovenu’s key successes, which has proven so popular with householders, is its specialist valeting process.

On average, the valeting process takes around three hours and involves dismantling key components of an oven, including the door, interior panels, fan and shelves.  The parts are then placed into design-registered equipment, which uses non-caustic cleaning products leaving the oven in pristine condition.

Rik Hellewell, Managing Director of Ovenu, said: “We have had a number of enquires from people living in rural counties wanting to use our services, which led us to launching a franchise offering for those areas.

“One of the best things about being an Ovenu franchisee is that people can follow our managerial, administrative, and marketing methods, which have already proven to be a success.

“It also provides the opportunity for people to start their own business, but with the added peace of mind that working under the banner of Ovenu brings.

“We are dedicated to helping our franchisees succeed and have launched over one hundred ventures over the last fifteen years, which I would say makes us experts in our marketplace.”