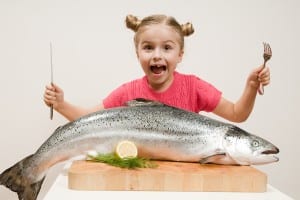 It’s a well-known fact that fish is a superfood; it’s jam-packed with healthy vitamins and is a great source of omega-3 fatty acids. Eating fish can help you concentrate and reduces risk of heart disease. It’s also an incredibly versatile dish to cook with, with such a wide selected of sustainably sourced seafood available here in the UK.

It’s worth learning how to cook and prepare a fishy dish properly so that you can treat yourself to this awesome brain-food whenever you like. Why not try your hand at one of the four fantastic fish recipes below? Let us know how you got on over on our Facebook page.

Pre-heat your oven to 220oC (fan ovens 200oC) gas mark 7. Place the sliced potatoes onto a pre-greased oven tray, drizzle them with a tablespoon of olive oil and season them with salt. Bake the chips in the oven for 40 minutes, turning half way through.

Mix the breadcrumbs together with the lemon zest and parsley. Coat the cod with the breadcrumb mixture until it’s covered evenly and then drizzle the fish with the rest of the oil.

Place the coated fish in a roasting tin with the cherry tomatoes, then put the tin in the oven with the chips for their final 10 minutes of cooking time.

Serve with a dash of salt and lemon, or a tantalising tartar sauce.

Sprinkle the fish fillets with garlic salt, and cut them into roughly 2 x 6 cm strips, following the fillet’s natural lines.

Beat the egg in a large bowl and pour the flour onto a plate. Place the breadcrumbs on another plate and mix them with the chopped parsley, paprika and lemon peel.

Take a slice of the fish and dust it in the flour, then dip it in the egg, allowing the excess to drip off, and finally place it in the breadcrumbs until it’s properly coated.

Repeat this step until everything is prepared, then transfer the fish fingers onto a lightly greased baking tray and place it in the fridge for about an hour. This will allow everything to settle and make the fingers much easier to handle.

Whilst your waiting for the fingers to set, heat your oven to 220oC (fan ovens 200oC) gas mark 7.

Take the tray out of the fridge once the hour is up and drizzle the fish fingers with vegetable oil.

Bake the fingers for 15 minutes, or until the breadcrumbs turn lightly golden.

Once ready, sprinkle with salt and lemon and serve with chips and salad.

Heat the milk in a large pan and add the fish.

Make a small cut in one of the halves and insert the cloves. Place this halve into the pan with the milk and fish. Bring the milk up to the boil then reduce the heat and let it simmer gently for 6 minutes.

Boil the potato chunks in a pan until they’re nice and soft. Drain the water and mash the chunks with half the butter and some warm milk until smooth. Season with salt to your liking and set the mash aside, ensuring it’s kept warm.

Finely chop the remaining half of the onion. Heat the remaining butter with the olive oil in a small frying pan and gently fry the onion and the leek for a few minutes until they’re soft, but not brown.

Remove the fish from the pan (keeping the milk inside), and put it aside on a plate to let it cool slightly.

Add the flour to the leek and onion mix and stir well. Fry for about a minute, stirring constantly, then slowly spoon in the milk from the fish pan. Keep stirring the mix until it thickens into a sauce. Season with salt and pepper according to taste.

Break the fish up into small chunks, feeling for bones as you go, and mix it with the sauce. Place the entire mixture into an ovenproof dish and scatter the parsley leaves on top.

Spread the mashed potato across the top and sprinkle the cheese evenly. Place the dish in the oven for 30 minutes until the top is golden brown.

Take it out the oven and enjoy.

Oil the pizza base, then break up the salmon into chunks and spread it across the base, along with the avocado and sun-dried tomatoes.

Sprinkle the mozzarella all over the pizza.

Bake in the oven for 15 minutes, until the cheese begins to bubble.

Served with salad and enjoy.