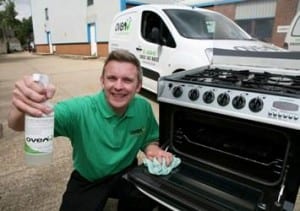 Ovenu, the professional oven valeting service has helped Neil Greenfield, a former sub-editor, trade in his newspaper job for life as a cleaning specialist setting up a new franchise in St Albans.

The 41-year-old from St Albans who lives with his wife and two children will service businesses and customers, in and around Harpenden and the St Albans area.

Neil worked as a sub-editor of a London based newspaper for 15 years. After years of long days in the capital, Neil decided to take redundancy when the oven cleaning franchise opportunity arose and become his own boss.

Neil said: “After taking redundancy I worked freelance for a short time but really wanted to start by own business. I spent a lot of time looking into several franchises, but Ovenu seen the most straight forward company to work with.

“I was looking for the flexibility and work life balance, which was key to my decision of setting up my own franchise. The size of my franchise area was also another reason I joined Ovenu, it will provide me with the potential to build on my customer base and develop it further.

Rik Hellewell, Managing Director of Ovenu, said: “It’s great to have Neil running the Ovenu franchise in St Albans. He is an enthusiastic and hard-working man who will soon have lots of clients.

Over the last 16 years we have established a very simple, but effective franchise model. As a company we are growing and expanding into new areas. With the right business acumen and commitment, Ovenu can provide a very successful business opportunity for potential franchisees with high growth potential.”