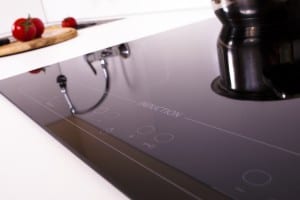 Cooking technology has come a long way since the discovery of fire. The humble microwave was once the pinnacle of kitchen wizardry. But now, there’s a new piece of kitchen kit taking over the humble hob: the induction cooker.

We’re going to take a look at this magnet-based technology, how it differs from other kinds of hob and how you can keep yours clean and in working order.

What Is an Induction Hob?

On the outside, an induction hob looks really similar to your average modern electric stovetop, a mechanism that hasn’t changed significantly for over 40 years. But that’s where the similarities end.

Inside, the mechanism is totally different. Instead of using the good old-fashioned heat-transfer process we know and love, it uses electromagnetic induction.

It’s complicated science that depends on the mysterious relationship between electricity and magnetism, but the basic principles and effects are pretty easy to grasp.

So How Does an Induction Hob Work?

Under the glass stovetop, there’s a metal coil that electricity passes through. When you switch the cooker on, the coil generates a magnetic field. When you put a cooking pan on the hob, the magnetic field underneath induces an electrical current.

This isn’t electricity like the kind that comes out of a wall socket, though; it’s safe to be around. It generates an eddy current, a constantly moving current that can’t get out of the metal of the pan, so it just keeps bouncing around the molecules that the pan is made of until it gets hot. The heat is then transferred to the food and voilà – you’re cooking!

Advantages of an Induction Hob

Besides the complexity of the induction process, the design of an induction hob is extremely simple, leaving little to go wrong, and it requires only a quick fix for any certified professional if it ever does.

Another nifty feature is that without a pan on top of it, the hob is incapable of generating any heat, making it safer if some curious little children have been playing with the cooker!

It also means no more thoughts of ‘Did I turn the cooker off?’ before you set off out, though be careful as residual heat remains after cooking because the pan will transfer heat to the hob.
This residual heat means that food can still get burned onto the hob, but it’s much less likely.

Disadvantages of an Induction Hob

There aren’t many of these, but one key disadvantage could be a deal-breaker for many. An induction hob will only work with specific cooking pans: magnetic ones, to be precise.

Aluminium is a very popular material for pans because it’s light, cheap, easy to coat with non-stick surfaces, durable and an excellent conductor of heat. But it’s not a magnetic material.

It has a different effect on magnetic fields and eddy currents, much like another popular pan material: copper.

Copper is an excellent conductor of heat – one of the best, in fact, making it ideal for cooking. Lots of high-end cookware is made of it, so if you’ve spent upwards of £200 on a single copper pan and have a whole arsenal of copper cookware in your kitchen, an induction hob isn’t a sound investment.

How to Clean an Induction Hob

Cleaning and maintenance are a key part of owning any kind of cooker, oven or hob, but, naturally, cleaning techniques will differ with each type.

At Ovenu, our expert cleaners can get any hob sparkling clean, but induction and other glass-topped units can dull over time. Avoid dragging pans over the surface to minimise marks.

Internal maintenance is best carried out by the manufacturer or a certified electrical goods engineer, but the simple design is usually hassle-free. Taking care of your hob should be pretty easy, too, as it can’t heat food directly if it falls out of the pan.

If you do need to give your induction hob a clean, harsh chemicals or specialist cleaners won’t be required. Hot soapy water and a cloth is usually all you’ll need. If you’ve got a lot of grease around, washing-up liquid will do a fine job.

Rinse off the suds and allow the top to dry. White vinegar can be applied for extra sheen and sparkle! Use a fresh, soft cloth to buff up the stovetop at the very end.

If you would like to find out how Ovenu can help maintain your induction hob and keep it clean, get in touch today.