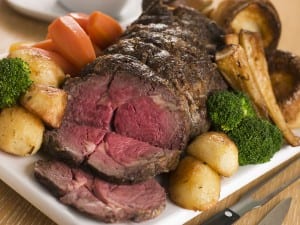 Tomorrow marks the beginning of British Food Fortnight, two weeks dedicated to celebrating the best in British dishes. If you hadn’t heard about it up until now, then don’t fret as there’s still plenty of time to get involved.

The festivities last from 21st September all the way through to the 6th October with events being held up and down the country. Love British Food, the organisation behind it all, have created a handy website that contains all the information and resources you’ll need to get yourself ready.

Seeing as us Brit’s have always had an affinity for food and cooking, we’ve included instructions on how you can cook the quintessential British family dishes below.

The classic Sunday Roast is a meal that’s synonymous with British Culture. There have been some variations over the years, including using chicken, pork and lamb; but overall beef is by far the most popular choice of meat to accompany this dish.

Prepare a large roasting tin by sprinkling in some oil. Season the beef with the lard, mustard and pepper before putting it in the tin and placing it inside the oven to roast for roughly 30 minutes.

Whilst the beef is roasting, use the time available to make the Yorkshire puddings. Mix the flour and the egg together in a bowl and pour in half the milk. Beat until you get a smooth mixture and then add the remaining milk as well as the 75ml of water.

Once thirty minutes are up, reduce the temperature to 160oC (140oC for fan ovens) or gas mark 3 and leave the beef to cook. Depending on how you prefer your meat cooked, leave the beef for 15 minutes for medium rare, and 25 for well done.

After it’s cooked to perfection, remove the beef from the oven and wrap it in foil to trap all the flavour, then leave it to rest in its own juices for at least 45 minutes.

With the beef out of the oven, crank the temperature back up to 220oC (200oC for fan ovens, gas mark 7). Grease up a muffin tin and pour in the pudding batter, place it in the oven and cook for about 20 minutes until it’s risen and golden brown.

For the gravy, pour all the juices from the roasting tin into a pan and leave it simmering on low heat with all the remaining ingredients stirred in. Wait for the mixture to reduce slightly before straining it and then serving it all over the meal. Enjoy.

A meal so simple that even your kids could cook it (with a little help from mum or dad of course). A beef variation is available under the guise of a cottage pie, but this is the recipe for the timeless original lamb dish.

Heat the onion and carrots in a saucepan with the oil until soft, then turn up the heat and add in the lamb, letting it simmer until it’s browned.

Pour in the Worcestershire sauce and tomato purée and mix together with the lamb, letting it fry for a few minutes before pouring in the stock. Cover the saucepan and cook for 40 minutes, stirring throughout.

Whilst waiting for that to cook, boil the potatoes for 10-15 minutes until tender. Then drain them and add butter and milk before mashing.

Once cooked, pour the mince into an ovenproof dish and layer with mashed potato. Drag a fork across to ruffle the surface. Bake the pie for 25 minutes until the mash starts to turn golden and the mince begins to bubble. Remove from the oven and leave it stand for a bit before tucking in.

Fish and Chips with Mushy Peas 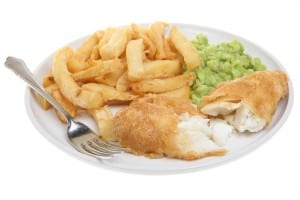 A delightful seaside specialty; just think of all the money you’ll save learning how to make the nations favourite takeaway food from the comfort of your home.

Boil the potato slices for 6-8 minutes, then drain well, and set them to one side to cool.

Place the cooled chips into an oven tin, coating them in oil. Roast the chips for 25 minutes, turning them halfway through then take them out. Add them back in around 15 minutes before you’re ready to serve in order to reheat.

Heat the peas in a saucepan with the vinegar and a knob of butter for around 5 minutes, then mash them together with a fork.

Meanwhile, heat the oil in a deep saucepan until it reaches 200°C.

To make the batter, mix both flours together in a bowl and gradually add the lager and the egg white until you have a smooth substance. Dip the fish into the mixture and ensure it is properly coated before frying it in the oil for until golden brown. This should take roughly eight minutes.

Remove once ready and season with salt. Serve together with a nice dollop of tartar sauce.

Those are our favourite British recipes, but what are yours? Let us know over on Facebook.

Fish And Chips From BigStock