Ovenu, the professional oven valeting service has helped Leigh Rigden, a high-flying multi-skilled worker, trade in a meter reading job for life as a cleaning specialist setting up a new oven cleaning franchise in Whitstable, Kent. 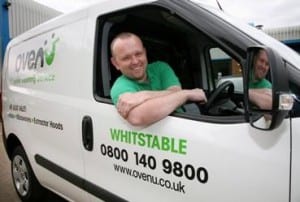 The 37-year-old from Whitstable will service businesses and customers, in and around Whitstable, Canterbury and Herne Bay. Leigh had previously worked as meter reader, graphic designer, and printer when he decided to run his own business.

Leigh said: “Since last December I decided to start my own business. I spent a lot of time looking into several oven cleaning franchises, but Ovenu seemed the most straight forward company to work with.

“I chose Ovenu because it was well established in the area and there proved to be a popular market for it. I am keen to build the customer base at present and to develop it even further.”

Rik Hellewell, Managing Director of Ovenu, said: “It’s great to have Leigh running Ovenu franchise in Whitstable. He is a multi-skilled, enthusiastic, hard working man who will soon have lots of clients. Over the last 16 years we have established a very simple, but very effective franchise model that, with the right business acumen and commitment, can provide a very successful business opportunity with huge growth potential.”