Back to Ovenu Service Site 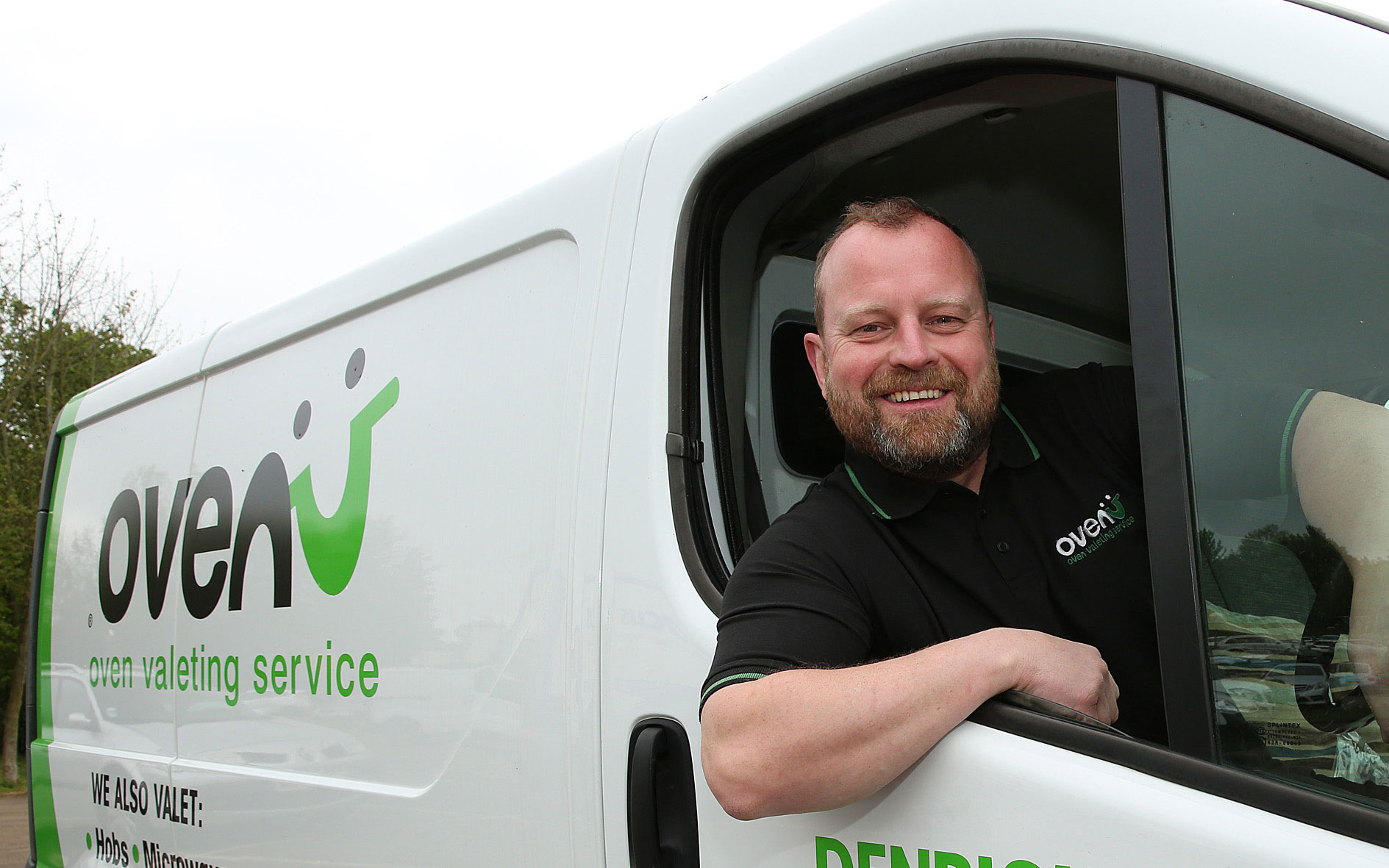 He bought into his first franchise in 2014 after being told that he was about to be made redundant from his office-based job.

With no formal qualifications and no experience of being a jobseeker, he trawled job sites before hearing that a colleague’s dad had invested in an Ovenu franchise.
Phil recalls:

“Being made redundant was a low period and affected my confidence but something really appealed to me about becoming my own boss, despite never having cleaned an oven in my life!

I’d started chatting to my wife about Ovenu after I’d heard from a friend’s relative that it was a pretty good business and it had worked really well for him in his territory before he’d retired at the tender age of 72. In the spring of 2014 I was totally fed up commuting over 3 hours a day from my home in Prestatyn to Manchester and back with my job as a windscreen fitter for a multi-national company. It was dark when I went to work and dark when I drove home. Depressing or what?

Like a lot of my co-workers and friends at the time, we all seemed to be working all of the hours, had credit cards almost maxed out each month and had little or no family time to spend with our nearest and dearest. This just wasn’t what I wanted to keep doing so I needed to make something different happen. So I did.

I started on my journey with Ovenu in the last week of April 2014 when I undertook the Induction Training. But before this happened I did all of the things you’re supposed to do like chatting to existing franchisees, putting together a business plan and making sure that my wife Sue was behind my decision.

The Ovenu induction programme provided me with a host of new skills and competencies, from how to leave an oven in sparkling condition to the basics of running a business.

There were loads of positive comments and great noises coming from all angles; family, friends, now ex-work colleagues – everybody was supportive but I was still nervous as a kitten!

Franchisees come from all walks of life and backgrounds, but the training is second to none and gives everyone, no matter what their previous career, the necessary skills and confidence to get your business off the ground.

On top of this, there is also the operations manual, the Ovenu bible – which backs up everything you’ve learnt. However, the induction is just the start and I’ve continued to benefit from the huge amount of ongoing support and advice that is always available.

I’m now into my second 5-year term as an Ovenu franchisee in my Denbighshire territory and I don’t think I could be happier with the way things are with my business! I’ve got a brilliant business in my local area, I start and finish in daylight (mainly!), I meet the most lovely clients in my area and I’m loving watching my family grow up. I set my own schedule and take holidays at times when it suits the family rather than when the rota tells me!

Has it all been easy? Nope! There’s a lot of hard work that goes into running your own business, but the beauty about the Ovenu business is you’re not on your own. There’s a whole bunch of experts and brilliant colleagues around who are keen, willing, and able to help no matter what the problem might seem to be. I can genuinely say there is no way I could have gotten to where I am now without their help and support, along with having my family by my side.

I’ve had my backside kicked occasionally by Ovenu HQ over the past few years and I’ll openly admit that. I thought this was a bit harsh at first but, once you take on board why you’re being nudged in a specific direction and see your turnover and profits improve, the penny drops pretty soon after!

For me, it’s not just about the money, but it’s nice to not have to worry about burned out credit cards anymore; rather getting a good reward for the hours and effort that I put in and being able to keep most of that for myself. I say most as I have fees to pay for the oven cleaning franchise, like all franchisees do, but I don’t begrudge our HQ a single penny given what I get back in exchange.

This business works for me and my family 100%, so if you’re looking at making a career out of the oven cleaning services sector I’d recommend chatting to Ovenu first. I did and it’s one of the best decisions I’ve ever made.”

A successful business model is key for Derek

Having previously been in the military for 25 years, one of Ovenu’s longest-serving franchisees certainly appreciates a clear and concise plan with realistic and achievable objectives.

When Derek Lancaster was looking to change career, he sought a business model that provided him with a blueprint for success in civvy street.

Since launching Ovenu Darlington in 2003, he has not looked back and within a few years had recruited wife Deb to offer extra support by cleaning grills and dealing with the extra administration.

“I certainly did plenty of research and looked at several franchises but discovered not all are the same calibre as Ovenu, which really stood out.

There are many oven cleaning outfits out there, but none has the same reputation for quality and exceptional service as Ovenu – which is why I enjoy a great deal of repeat custom.

It’s founded on tried and trusted processes and a business model that provides the necessary foundations to quickly build a thriving enterprise.

Another of its strengths is that it continues to evolve and develop. No business can afford to stand still and, despite a heritage stretching back more than two decades, Ovenu is no different.

If you’re committed and prepared to put the work in, Ovenu offers an efficient route to profitability. It has served us exceedingly well, allowing me to pay the mortgage off 15 years early, while we have been able to enjoy two or three decent holidays a year.

I certainly don’t have any regrets. I left the RAF knowing I wanted to be my own boss and Ovenu gave me the ability to run a business, while knowing I had a safety net of support and advice behind me.”

Sandra Gee, who launched Ovenu Lytham during the summer of 2019, has received tremendous support through being an active member of the brand’s network of more than 100 franchisees across the UK.

She can instantly communicate with fellow franchisees through one of the company’s three dedicated What’s App groups, as well as receive updates and advice via a regular Zoom call, hosted by Ovenu founder and managing director Rik Hellewell.

The introduction of What’s App and Zoom was born of necessity during the pandemic as a way of keeping in touch during the dark days of lockdown. However, everyone involved quickly realised the benefits and both have become a staple of the brand’s strong Ovenu support network.

In addition, Sandra also attends Ovenu’s annual AGM, where franchisees have an opportunity to meet each other, and Rik, face to face to discuss what’s going on in the business – as well as have some fun!

“No one starting out in business, whether independent or franchise, can ever know it all.

It’s really reassuring that, should I have a question or need some advice, I can often find the answer from my fellow franchisees, many of whom have been with Ovenu for many years. They are a fantastic resource and always willing to share a bit of wisdom!

In addition, Rik is at the end of the phone and is experienced in every aspect of running a business. I recently had an issue, and he instantly provided me with the answer.

Had I been on my own, not only would it have taken up a great deal of time, but I may have ended up seeking costly professional advice.

Being an Ovenu franchisee is like being part of one big team, where everyone has the same aim, to realise their potential and run a successful business.”

If you’d like to find out more about starting an Ovenu franchise business then read our FAQ, register your interest on the form to the right, or give us a call on 01189 743911.

Register Your Interest In Our Franchise