Successful businessman Terry Levitt from Telford is set to clean up in Telford, after establishing his own professional oven-valeting firm, Ovenu. 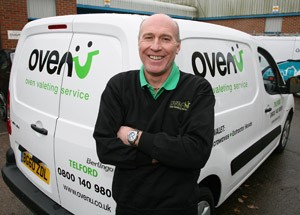 Terry, 51, will manage and direct the operations of the business that will serve customers throughout Telford and Shrewsbury and all surrounding areas   including Wellington, Shifnal, Ironbridge, Market Drayton and Wem.

Terry takes on the oven cleaning franchise opportunity after a long and successful career in the property sector. For over 20 years, Terry worked in property as an independent mortgage broker. After the recent slow down in the property market, Terry was finding it more difficult to continue with his business and decided he was ready for a new challenge.

Since being founded in 1994, Ovenu’s environmentally-friendly service attracts over 55,000 clients a year. The franchise model has been successfully replicated around the world, including Europe, Australia, New Zealand and the United States.

The valeting service involves dismantling key components of an oven such as the door, interior panels, fan and shelves and placing them into design-registered equipment, which uses non-caustic products to clean the oven parts.  The whole process takes around three hours and leaves the oven, hob and exterior in immaculate condition.

Terry said: “I spent a lot of time looking into the various opportunities available to me and into different franchises. I saw great potential in the Ovenu service and franchise model.

“I chose Ovenu because it was well established in the area and there proved to be a popular market for it. I am keen to build the customer base at present and to develop it even further.”

“Ovenu has a simple, but very effective franchise model that, with the right business acumen and commitment, can provide a very successful business opportunity with huge growth potential.”

Rik Hellewell, Managing Director of Ovenu said: “Essentially, franchising is about starting a new business with the support, back up and advice of a larger network behind you. Our franchise network continues to thrive and Terry’s natural business acumen and experience set him in good stead for developing a strong and successful business.”

Have a look at our franchise site for more information on our Oven Cleaning Franchise.