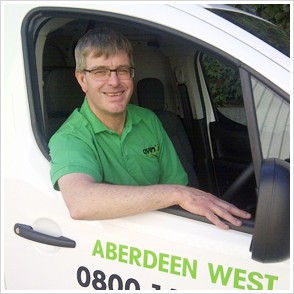 A budding entrepreneur from Westhill is driving forward in a new role as the West Aberdeen franchise owner for the professional oven valeting firm Ovenu.

Graeme Henderson, 47, a former Company Director and Financial Controller has stayed and worked in Aberdeenshire all his life so is very familiar with the area.

He decided that he wanted to take the step of becoming his own boss and began searching for franchising opportunities in the Aberdeen area. After a year of research he finally decided upon becoming an Ovenu franchisee, wanting to provide services to the Aberdeen community that he has always been fond of.

Throughout his new venture Graeme will be getting administrative support from his wife and family.

No stranger to working with the general public, Graeme has various financial qualifications, is a keen golfer and manages his local school’s football team. He is hoping to use his people skills across the West Aberdeen area, allowing homeowners to enjoy their spare time rather than wasting it on doing one of the most hated of all household chores – cleaning the oven.

Ovenu has attracted over 60,000 customers per year across the UK and its franchise model has been replicated in Europe, Australia and the United States.

Its valeting service is so thorough that key components of an oven are dismantled and placed into design-registered equipment, which uses non-caustic products to clean the oven parts. The process takes around three hours and leaves the oven, hob and exterior in immaculate condition.

He said: “I love living and working in Aberdeenshire, it’s a beautiful part of the world”.

“I have thought about becoming my own boss for a while, but wanted to be sure that I was committing myself to the right franchise and do something that I know I could make work.

“I preferred Ovenu because of the excellent track record that the company has with current clients and other franchisees across the country. No-one likes cleaning their oven, it really can be a pain-staking and greasy job, but now people living in West Aberdeen have the option of using my service.

Rik Hellewell from Ovenu said: “Graeme is an amiable guy and keen to make a real success of his business, and I wish him every success in their new venture.”