Ovenu, the Northumberland based oven valeting specialist, has given a regular customer a special loyalty reward in the shape of a £250 gift card.

Dean Coulston from Morpeth won the £250 Marks & Spencer gift card after being picked in the quarterly prize draw in the Ovenu customer newsletter.

Christine Peel, who runs the Ovenu franchise in Northumberland, was delighted when Dean had been chosen as the winner. 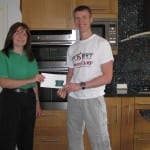 Christine launched her business more than three years ago and now cleans in excess of 40 ovens per month.

Originally from South Tyneside, Christine previously worked as a driving instructor for 12 years before becoming a school secretary. After relocating to rural Northumberland, the commute proved too far so Christine began looking at starting her own business.

Ovenu has been running the competition during the last three months through its newsletter, which is distributed to customers around the country. Previous prizes
have been a atoledo £250 Christmas gift hamper and last summer a BBQ. Through the monthly newsletter each customer also has the opportunity to win a rebate on the cost of an oven clean.

The valeting process involves dismantling key components of an oven such as the door, interior panels, fan and shelves and placing them into design-registered equipment, which uses non-caustic products to clean the oven parts. The whole process takes around three hours and leaves the oven, hob and exterior in immaculate condition.

Dean Coulson said: “The service Christine provided was first class, she has excellent work ethics and is both friendly and very helpful. Being a fellow business owner with Assert Health & Fitness, I completely agree with her approach. Service to the customer is paramount and it is clearly evident in her professionalism.”

Christine said: “Dean was over the moon when I called to say he had won the prize draw. I’m always pleased when customers can really see the benefit of having a professional oven clean.

“The response to the prize draw from all our customers was excellent. I couldn’t have hand picked a better person to be the lucky winner.”

Christine can be contacted on 0800 140 9800 or www.ovenunorthumberlandcentral.net