Former Gas engineer Craig Fletcher from Stourbridge is set to clean up in Stourbridge, after establishing his own professional oven-valeting firm, Ovenu.

Craig, 42, will manage and direct the operations of the business that will serve customers throughout Stourbridge, Hagley, Kidderminster and Kingswinford. 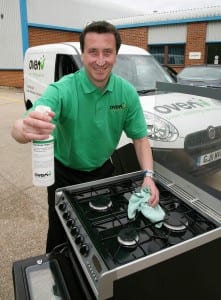 Craig takes on the oven cleaning franchise after six years as a gas engineer. Prior to that Craig worked at Bass Brewery for 15 years alongside friend Roger Rackham who previously owned the franchise.

When Roger, 57 from Stourbridge decided to take retirement, Craig asked for first refusal on the business, as he was ready for a new challenge.

Since being founded in 1994, Ovenu’s environmentally-friendly service attracts over 55,000 clients a year. The franchise model has been successfully replicated around the world, including Europe, Australia, New Zealand and the United States.

The valeting service involves dismantling key components of an oven such as the door, interior panels, fan and shelves and placing them into design-registered equipment, which uses non-caustic products to clean the oven parts.  The whole process takes around three hours and leaves the oven, hob and exterior in immaculate condition.

Craig said: “After the brewery shut down I re-trained to be a gas engineer but having met up with Roger on a regular basis, he kept me up to date on how his business was going. The more I heard the more I was interested in the thought of owning my own franchise. As soon as Roger mentioned he was looking to retire, I immediately asked for first refusal on the business.

“I’m used to visiting people’s houses as a gas meter fitter so my skills there will come in handy. I’ve not owned by own business before but I’m looking forward to it. Knowing I have my friend Roger on speed dial to offer advice makes it a lot easier!

“The business is well established and has great potential. I hope to expand in due course with the possibility of taking on another valeter in about six months.”

Rik Hellewell, Managing Director of Ovenu said: “Essentially, franchising is about starting a new business with the support, back up and advice of a larger network behind you. Our franchise network continues to thrive and Craig’s a natural people person so his experience will set him in good stead for developing a strong and successful business.”