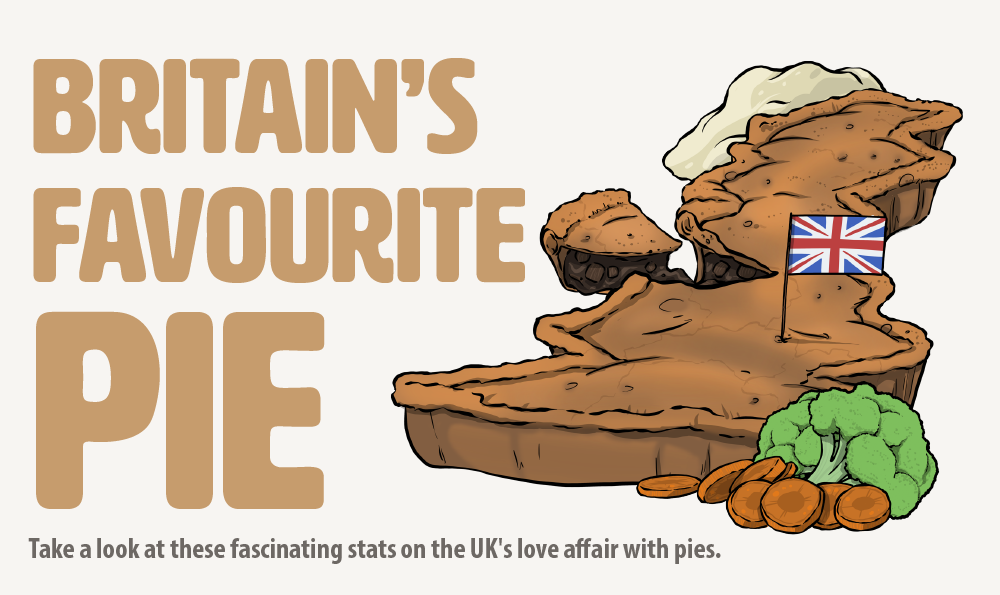 British Pie Week runs from 6-12 March this year. In a bid to discover the nation’s favourite pie flavour Ovenu ran a tasty survey on the family favourite. The survey results of over 1,000 people uncovered a wealth of interesting stats and facts about the country’s love affair with the pastry favourite; from lifetime consumption to top flavours and pie-loving hotspots.

As a nation of pie fanatics, it seems that we love nothing better than grabbing a slice of the action. In fact, Ovenu’s survey results revealed that the average Brit will consume an unbelievable 2,041 pies in their lifetime.

The consumption data highlighted the locations across the UK where people were eating the most pies. The top pie-loving location in the UK is Yorkshire and the Humber, followed by East Midlands and Scotland in second and third place.

We asked people to name their favourite pie flavour. One flavour was the standout winner: apple! Coming in at second place was steak and ale, followed by chicken and vegetable.

Here’s the full list of the nation’s top pie flavours:

Next, respondents were asked which they preferred: sweet or savoury. Rather surprisingly, more people preferred to tuck into a sweet pie than a savoury snack. It seems that the majority of us Brits have a sweet tooth.

To get a full picture of what makes the perfect pie, we asked people whether they preferred shortcrust or puff pastry pies. Most people went for shortcrust, perhaps because it leaves more room for the delectable contents.

Battle of The Brands

When it came to the top pie brands, the majority of the consumers we asked said that they would pick Pukka. This was followed in second place by supermarkets’ own and Mr Kipling. In terms of the top supermarkets for pie perfection, Tesco came first, followed by Sainsbury’s and then Asda.

Survey data revealed that steak and kidney is the crowd-pleasing flavour for men, whereas apple tops the list of women’s favourite flavours.

If all this talk of pies has got you ready to bake, take a look at Ovenu’s best British pie recipes.

Does your oven need some TLC? Contact Ovenu today for a professional clean that will get it looking tip-top in no time at all.