Richard Greenwood, (below right), entrepreneurial businessman and owner of the entire West Yorkshire operation of oven valeting business, Ovenu, talks about the importance of maintaining ovens, focusing on making the most out of the versatile Aga cooker.

There is no doubting the fact that the ever-versatile Aga is back in fashion as the booming property market sends demand for the famous cast-iron cookers to the highest levels since before the recession hit. Orders of the near £10,000-a-time cookers were running 15 per cent higher than last year as more people move home, and spend that bit extra on doing up the kitchen. The resurgence of the Aga and range cookers can in part be put down to their lower running costs with the introduction of the electric Aga. The electric version can be run for £5 a week, compared with £25 for older oil-based ovens. It is still largely seen as an aspirational brand but it is slowly and surely also attracting a younger, more cosmopolitan customer.

My own oven valeting business has serviced increasing numbers of jobs involving Agas and range cookers, and business has increased in this area by 15% compared to last year.

But what is it that makes the Aga so desirable?

As well as being large in appearance with multiple means of cooking, the Aga can absorb heat from a low intensity, allowing for maximum performance, as well as making homes more energy efficient. Unlike a traditional oven, which simply heats food with direct heat, the radiant heat from an Aga’s cast iron gently cooks food that locks in its flavour. Its design alone was voted as one of the top three design icons in the 20th Century, and is available in a range of colours, allowing the Aga to blend into multiple kitchen settings.

One of my customers, Sue Alderson, who is a director at Azure Consulting, a Wakefield-based coaching and leadership specialist, shares the view that the Aga is the premier kitchen appliance. 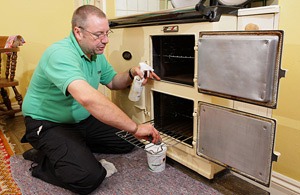 “The versatility of the Aga is what sets it ahead of the rest,” she explains. “It is fantastic for slow cooking, and its multiple ovens allow for even more multi-tasking in the kitchen. They may cost more to run, as my husband keeps telling me, but its performance and satisfaction that it brings cannot be underestimated. They’re also marvellous for baking meringues!

Sue added: “Finding the time to clean the oven can be difficult, and when you do decide to confront the challenge head on, sometimes you cannot get into all of the areas, so it is important to see the job all the way through because the oven is such an important appliance in the home.”

Oven cleaning remains one of the most hated chores, according to many surveys, and this is why it is rarely tackled. However, this can leave a build-up of fatty deposits, which poses a serious health hazard, so, the importance of a fully functional and clean oven cannot be under-estimated. Many Aga loyalists report that owning an Aga can put the joy back into cleaning and that they are also more likely to maintain it to keep it looking pristine.

It can also prove to be a cheaper option than having to spend money on a new appliance, saving home-owners a lot of hassle.

“It puts your mind at ease that a professional is tending to something that you rely upon on a daily basis,” Sue explained. “I am always extremely satisfied with the professionalism of the job, which transforms my Aga to near new condition, and one thing less to worry about.”

There’s no denying that the Aga is becoming one of the most sought after kitchen appliances, for many reasons. With the economy improving and home-owners becoming more comfortable in spending money on ways to improve their homes, the Aga is becoming something of a mini boom industry.

The Ovenu valeting process involves dismantling key components of an oven such as the door, interior panels, fan and shelves and placing them into design-registered tank equipment, which uses safe, non-caustic products to clean the oven parts. The whole process takes around three to four hours and leaves the oven, hob and extractor in immaculate condition.

An AGA is very easy to keep clean, particularly if you don’t allow it to become dirty in the first place! There are numerous ways you can help by following some simple maintenance tips. For a more thorough clean, the oven valeting process is an excellent way of extending the lifespan of an AGA or a range cooker.

The following tips may be of help for anyone wanting to extend the life of their AGA on a day-to-day basis:

The main, hot ovens and hotplates help to keep themselves clean by carbonising cooking spills and splashes. Just brush off the carbon dust. For stubborn stains, don’t be afraid to use a wire brush on the plain cast-iron components.

If spills have become baked on to the enamel, use a soap-filled pad, not too coarse, so as to avoid scratching the enamel DO NOT use ‘oven cleaners’. Splashes and spills on the vitreous enamel should be wiped away as soon as possible, using a damp (not wet) soft cloth. The AGA e-cloths are ideal. You can use a specific product such as the AGA enamel cleaner. Never use a cold wet cloth.

Likewise the inner linings of the oven doors and insulating lids can be cleaned with a cream cleanser or for more stubborn marks, a soap filled pad. The lining will show some marks but will shine beautifully.